For Spring 2020 Dior released 2 new limited edition Diorskin Nude Luminizers and i’m IN LOVE! I always tell myself I don’t need any more highlighters but when it comes to Dior I have zero self control.

Dior also released 3 new Backstage Rosy Glow blushes earlier this year as well. There were 2 new shades along with the original, all repackaged in a new sleek format. I honestly don’t get the hype of the original pink as it’s so dry and powdery, but the new limited edition colour Pearl caught my eye so I added to cart.

These limited edition Nude Luminizers have the most beautiful swirl embossing. They still come in the slim compact with the silver lid and clear acrylic base which I love. As far as packaging goes, Dior really nailed it with this one. It’s also lightweight and very portable too.

Here’s a look at the two shades, Coral Vibes and Rosy Vibes.

Coral Vibes is a peachy coral with a golden glistening sheen. The powder is harder pressed so not much kick up, but silky smooth when applied. The payoff is a medium opacity that can be built up.

Rosy Vibes is a pale pink with soft lilac and pink shimmers; it almost looks holographic and glittery in direct lighting. The lighter base in this makes it more suitable for fairer skin tones, however still wearable and look good on medium-light skin tones (like mine) without pulling ashy.

The texture between the two are slightly different. I feel Rosy Vibes has a tendency to go on sheerer when applied.

So far i’ve been using a moderately dense brush so there’s zero chance of overdoing it. However I feel it’s pretty safe to use even if you are a bit heavy handed.

On to some comparisons!

I swatched these alongside two newly released highlighters and some older Nude Luminizers in my stash for reference (in case you happen to have some of them).

As seen, Metal Peach has a distinct peachiness and Chantecaille Eclat Brillant an obvious gold.

Dior Rosy Glow 003 Pearl is a soft pink with subtle golden shimmer. It’s a very portable and handy size. Luckily the colour is also pretty nice! Swatched heavily this shade almost leans blue toned, but blended out it adapts n warms up on the skin. I feel the trickery is in the fact that it’s so sheer and almost translucent which is what makes it suit every possible skin tone imparting that veil of a rosy flush.

If you are on the look out for something pigmented and statement worthy this definitely won’t cut it; but more suitable for a natural flushed look or a ‘rosy glow’ as the name suggests.

Here’re a few more comparisons. I know you most likely own NARS Orgasm so what better reference point! NARS clearly has more pronounced gold shimmers. In Dior they are more spread out and less noticeable. In real life it can look matte with a subtle sheen especially when it’s applied over a matte foundation. On bare skin it looks more satin to the naked eye when it melds with the luminosity of skin.

Another blush i’ve been really loving is this Hourglass one from the Holiday 2019 Ghost Quad. The base in this pulls a little more blue toned even though when I grabbed to swatch it, I was so sure they were identical.

Overall I believe it’s a beautiful blush. It depends on how barely there you like your blush to be. It’s definitely buildable but I can’t say it’s a must have, even though the packaging is sooo cute & irresistible.

Coral Vibes is my favourite from my Dior Picks so far. I also grabbed one of the polishes, but yet to try it. I’ll swatch it for Instagram soon though.

What are your picks from Dior Spring 2020? 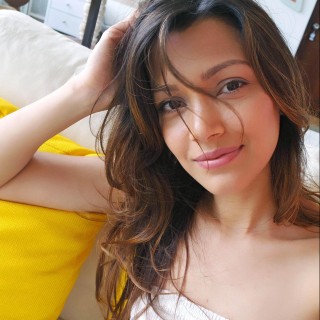 I love Dior backstage highlighter palettes ✨. But it’s the first time ever trying out the 9 pan eye palettes. They are so compact! And the selection of colours are always curated so well 😯👌🏼. Perfect to spend🧧🧧🧧 money on🍊!
Ringing in the new year with D.I.O.R 🥂✨✨✨
Did a little hauliday shopping with a friend and we stopped by the new Gucci Beauty boutique at Ion.
Pretty things… ✨✨✨ Breaking out these new (& improved) Clé de Peau Luminizing Face Enhancers. … Formulated with new technology, they contain nature-identical opal shimmers for delivering the most luminous, multi dimensional glow this festive season.
Hello December ☃️, my favourite time of the year.
Posting up swatches of the last lipstick lineup 🍂🍁.
Enjoying the cosy weather this week before the December rush 🍁🍂 ☺️.
Warm caramel, brick red vibe 🍁🍂... cos cosy weather calls for warm toasty shades in my book.